A sonar image shows what may be the U.S.S. Chattanooga on the bottom of the Tennessee River. On either side of the long, dark rectangle in the middle of the screen are wooden framing and planks. The circular object in the upper righthand corner may be part of a paddlewheel. The dark rectangle is an acoustic shadow created by the sonar device.

Morgan Smith wasn’t sure he’d find what he was seeking. Heck, he didn’t even know if it was there at all.

He thinks he found it on the first try.

Smith, assistant professor in the UTC Department of Anthropology at the University of Tennessee at Chattanooga, and his students are 90 percent sure they located the wreckage of the U.S.S. Chattanooga, a steamship that brought supplies to the starving army of U.S. Gen. Ulysses S. Grant outside Chattanooga in 1863. According to historical records, supplies had dwindled until there was only one loaf of bread left for Union soldiers.

After the war, the ship sat on the northern side of the Tennessee River across from what is now the Tennessee Aquarium and Riverfront. Eventually, it fell apart and sank.

On April 14, Smith and students in his “Underwater Anthropology” course are pretty sure they found pieces of it sitting on the muddy river bottom.

“It had a big role in American history,” Smith told a group of students before they pulled away from the Riverfront fishing pier on a pontoon boat.

As the boat cruised back and forth on a section of the river—“It’s called ‘Mowing the Lawn,”’ Smith said—a sonar computer screen showed dark spots on the river floor. Some large, some small, some straight-edged, some curvy. The U.S.S. Chattanooga ship was a “Frankenstein,” made from parts scavenged from other ships, Smith said, so it probably has broken apart.

“That might be the paddlewheel,” he said, pointing to a round shape on the sonar screen.

Coming across pieces of  the U.S. Chattanooga is “exhilarating,” said Austin Averill, a senior in environmental science.

“It was fun. It was very interesting,” India Toth, a senior with a double major in anthropology and chemistry, said after stepping off the pontoon boat onto the pier.

The next step he’ll take, Smith said, is to compare the sonar imagery with archival data, getting an idea of the length and width of the ship to see if they line up with what’s in the water. Construction techniques used at the time of the Civil War also will be compared to the wreck for further confirmation, he said.

An initial look with sonar can find a submerged wreck without disturbing it and without spending a lot of money only to find nothing.

“It’s one of the main ways to try to find locations without actually taking all of the equipment and all the money and all the people in diving. It’s a lot more efficient,” Smith explained.

Along with the U.S.S. Chattanooga, sonar also detected five or six other wrecks, probably barges, he said.

“It’s one of the defining factors of the employment spectrum. Is there a diversity of skills?” he said. “If you’re studying a site that’s in the water, you need to know how.” 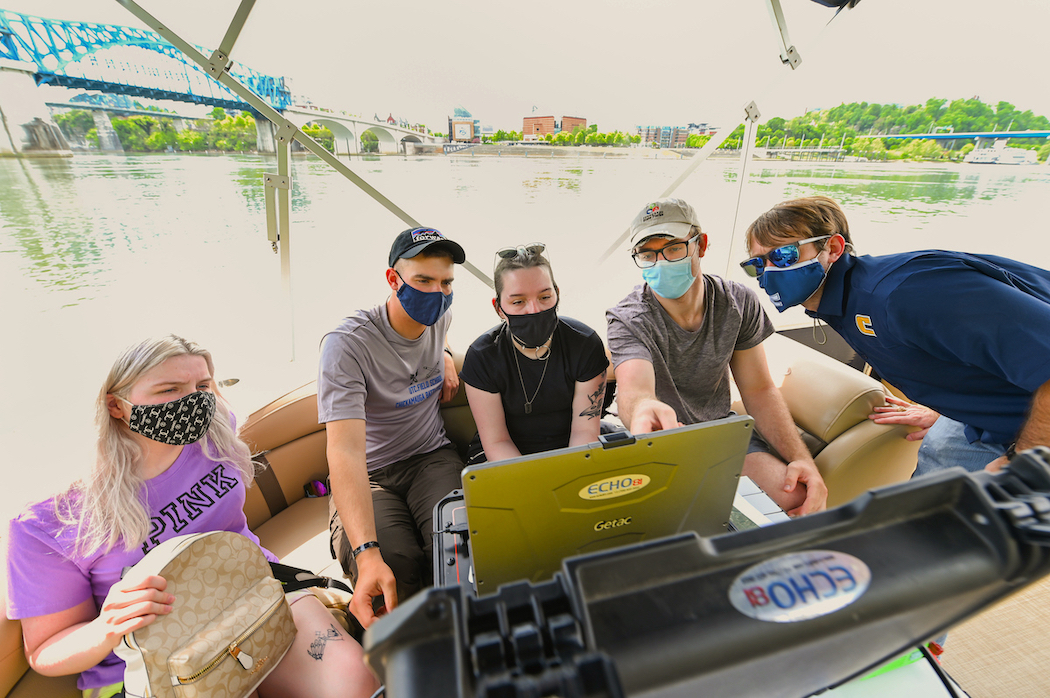 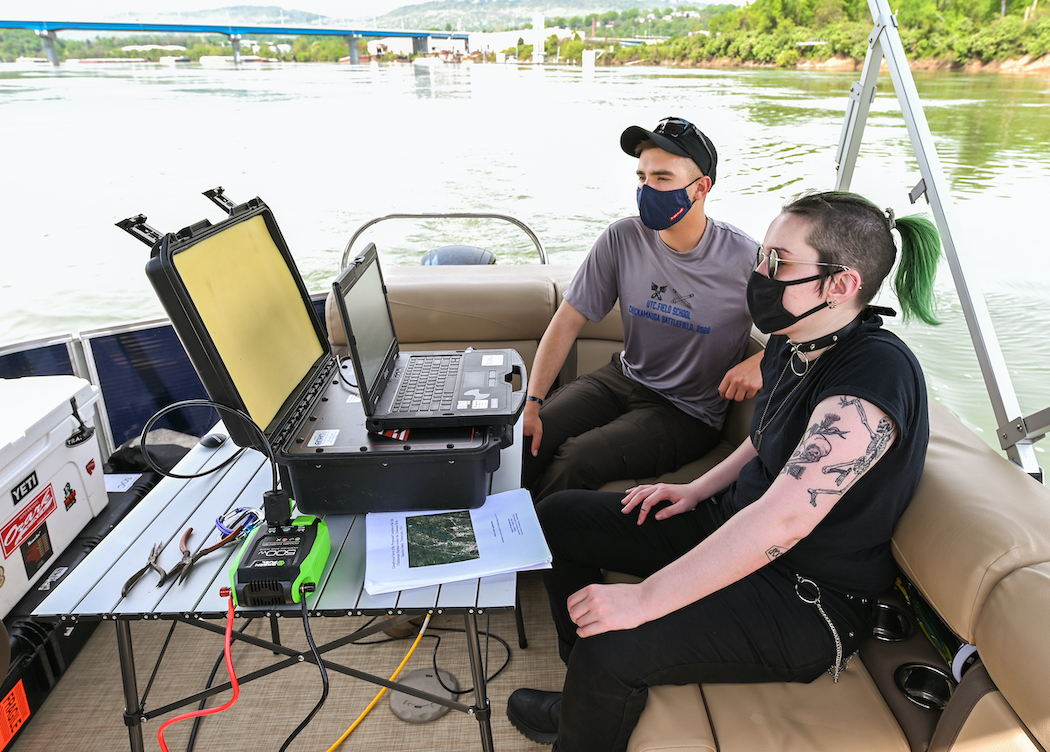 Sam Fuller and India Toth keep an eye on the sonar screen during the underwater search. 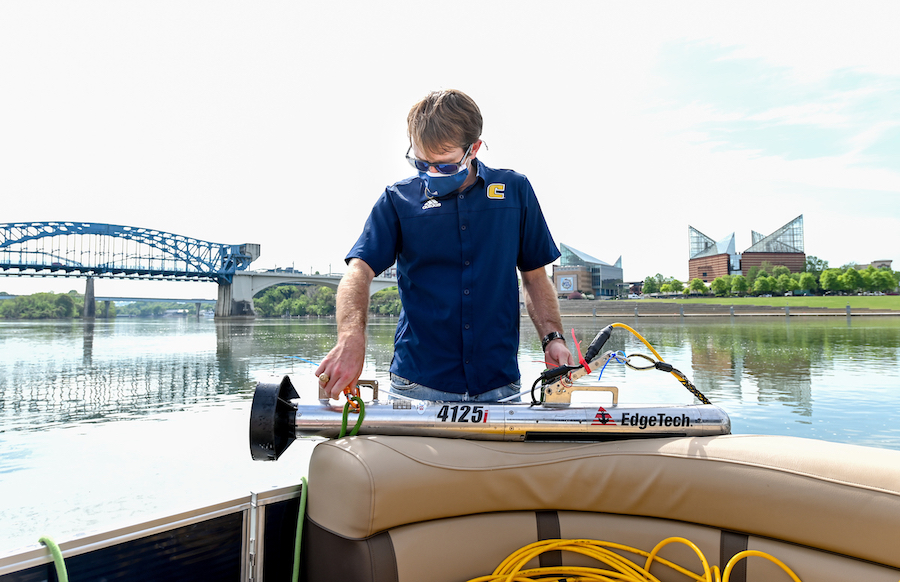 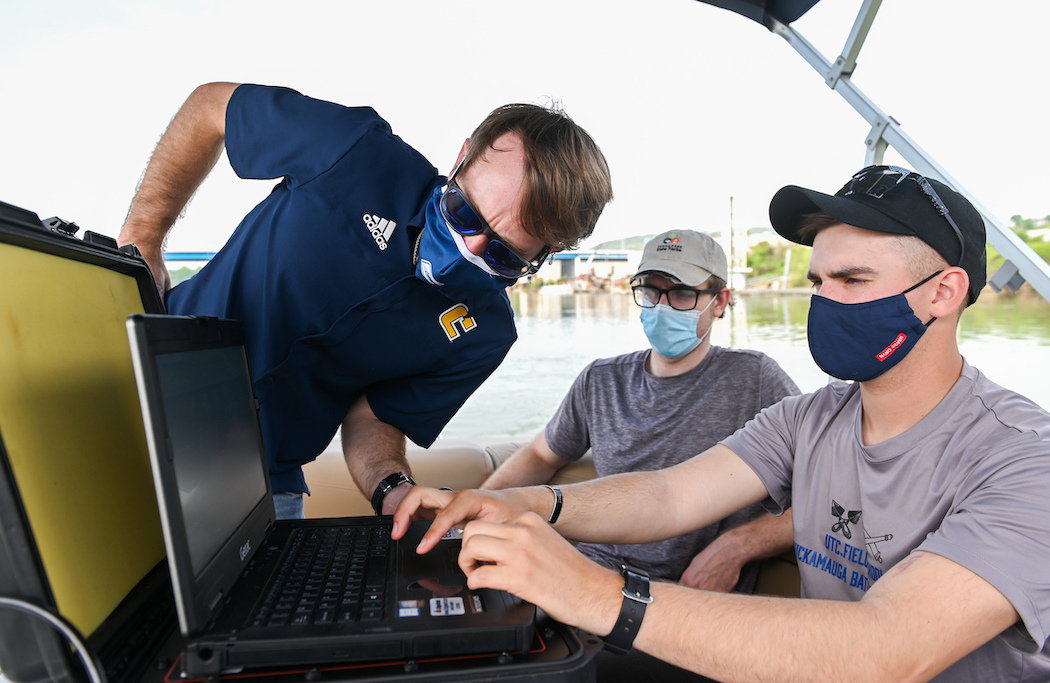