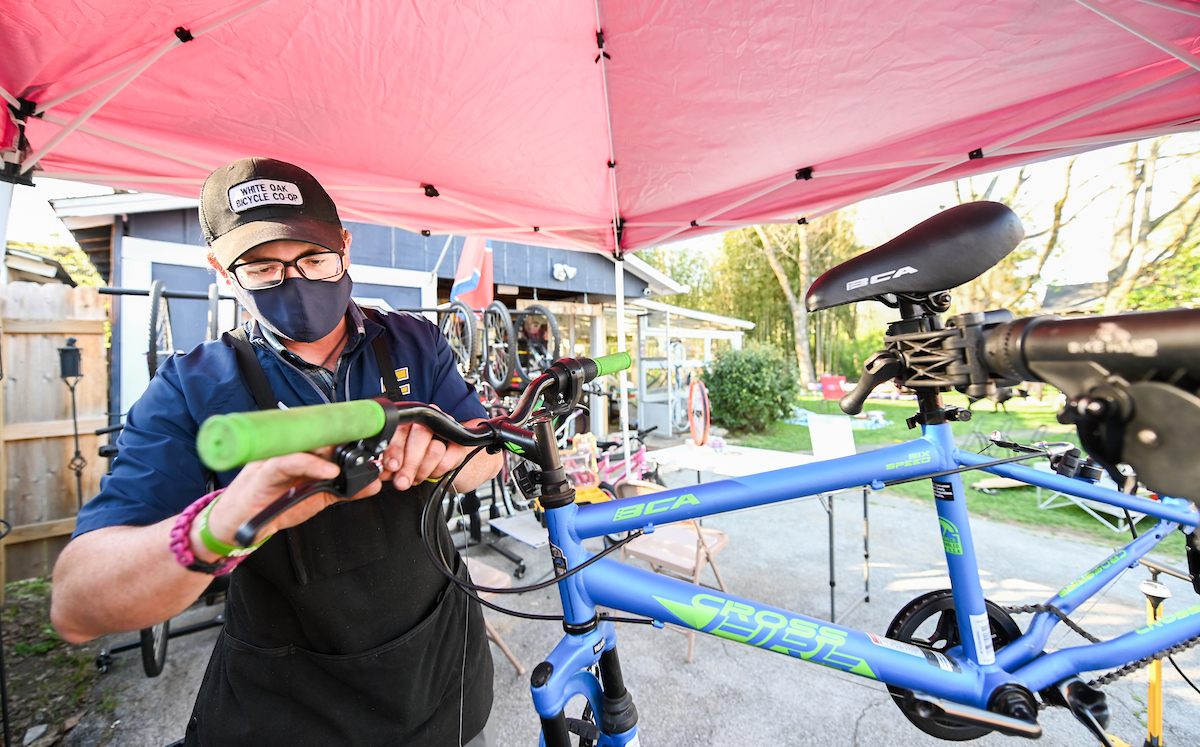 In his “backyard operation,” Blake Pierce takes in bikes in dire need of repair and returns them to working order.

For additional information about White Oak Bicycle Co-Op, including how to donate, visit the organization’s website or contact Blake Pierce at blake@whiteoakbicycle.org.

Blake Pierce has a tremendous heart for giving back to the community.

Pierce, an exercise science lecturer in the University of Tennessee at Chattanooga’s Health and Human Performance department, also is a bicycle enthusiast.

Over the past year, Pierce and some of his cycling confidants have found a way to blend those two passions by renovating bicycles for those in need.

“With all the chaos going on around us, a group of friends and I just said, ‘What are some ways that we could use our talents and our skills to make a positive impact on the community?’” Pierce said.

In answer to that question, they created the White Oak Bicycle Co-Op (WOBC), a volunteer nonprofit community bicycle organization.

“One of our partners used to be a bicycle mechanic out in Colorado, so we have someone with experience. And we have all ridden for many years and worked on bicycles,” Pierce said.

Working primarily from inside Pierce’s garage, WOBC has a mission of providing refurbished bicycles and bicycle repair services with an emphasis on children and low-income households, where bikes are essential as a mode of transportation and individuals facing homelessness.

The hope, Pierce said, is to receive donations of bicycles in decent shape that can quickly be turned around and distributed. But thanks to what he termed his “backyard operation,” WOBC takes in bikes in dire need of repair and returns them to working order.

“It’s just as simple as someone has a used bike, we’ll take that bike and we do an evaluation on it,” said Pierce, who serves as the organization’s shop manager. “If it can be repaired, we’ll put on new parts, new tires, new chains, pedals, anything that the bicycle may need, and we’ll get it as good as new.

“And if it can’t be repaired, we’ll take all the used parts off and use them on other bikes. What’s left over, we’ll recycle.”

Pierce said his inspiration came from a child he encountered after moving into his Red Bank, Tennessee, neighborhood.

“It took me a while to realize that there was hardly any rubber on the bottom of this child’s shoes,” he recalled, “so I asked him, ‘What happened to your shoes?’ And he said, ‘I use my shoes for brakes.’

“He was just 10 or 11 years old, and all these safety issues were going on in my head. But it made me realize that he enjoyed riding his bike so much that he would just go and wear out his only pair of shoes because bicycle riding is fun. That just morphed into the thought that there may be a niche in fixing bicycles and helping out others.”

While most of the repairs occur as part of volunteer get-togethers that take place every other Monday night, WOBC also makes house calls within the community.

“One of the things that I wanted to do in putting all this together is help those who could not afford bicycle repair services,” Pierce said. “So we’ve gone downtown to Miller Plaza and worked on bikes down there. These are services that some of those individuals would otherwise not be able to afford.”

Much of what the volunteer organization does is purposely done without fanfare.

“I wanted to remove all the barriers and basically say, ‘Hey, if you’re a kid and you need a bike, or if you’re someone who’s struggling and may need a bicycle for transportation, let’s cut out the red tape and get you a bike,’ and that’s what we strive to do,” Pierce said. “We want to respect the population we’re working with, so we don’t go out and take pictures of the people facing homelessness we’re giving bikes to or of children in need. We stay off the radar that way.”

Throughout the spring and summer, Pierce and other WOBC volunteers will be hard at work restoring used bicycles that come their way.

“We’ll have bike stands and bikes everywhere, just turning them out and trying to make a positive impact,” he said. “All of this has happened organically, just word of mouth. People hear about us and say, ‘Hey, I have a bike and I’d like to help,’ or they want to donate money or bicycle parts or supplies or tools or anything like that.