After more than 47 seasons, Mike Royster lays down his Mocs helmet 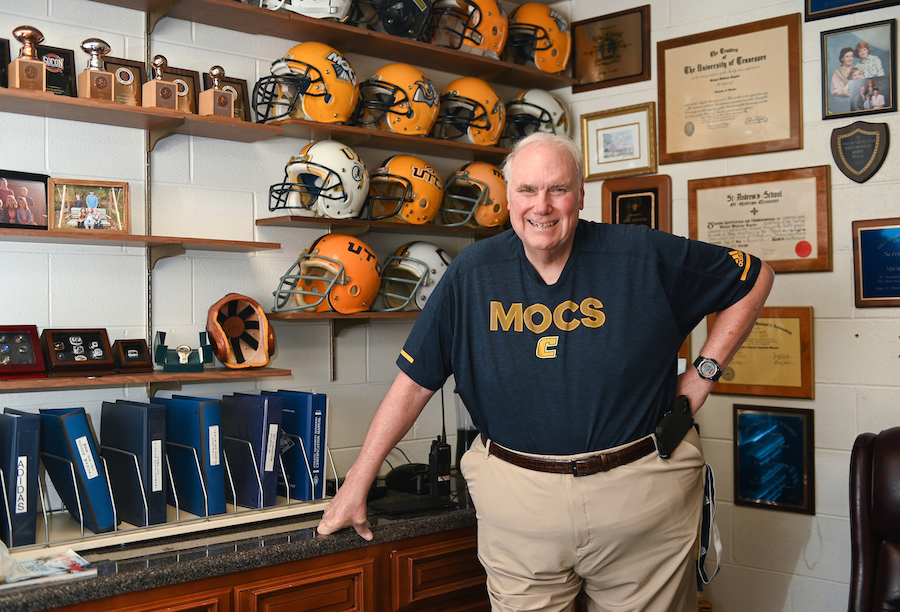 Mike Royster isn’t quite ready to hang up his cleats.

Or say goodbye to hanging up uniforms, for that matter.

After more than 47 years as the University of Tennessee at Chattanooga football team’s equipment manager, Royster will relinquish day-to-day duties at the end of June when he officially retires from the University.

The key word there is “officially.” Unofficially, he still plans to lend a hand on game days.

“What else am I going to do other than sleep late?” he said with a laugh. “I don’t have any big plans, and I certainly don’t mind coming back to help out and work the games.”

If you don’t know Royster, let’s just call him an institution unto himself. Thanks to his height—he stands nearly 6-foot, 7-inches—he has been easy to spot on the Mocs sidelines or sitting courtside at basketball games.

“But that’s also the problem. I can’t move as fast as I used to,” said Royster, a 2005 inductee into the UTC Athletics Hall of Fame. “If I could still move the way I did when I was younger, I wouldn’t even think about retirement.

“These kids now, every year they get faster and bigger. If you’re not paying total attention to what’s happening on the field—and you can’t pay total attention because you’ve got too many things going on around you—you’re liable to get run over. I’ve had a few, and my body can’t take another one of those.”

Royster arrived at UTC in 1974 when football games were played in the middle of campus on Chamberlain Field and all indoor sports took place at Maclellan Gymnasium.

During his time at UTC, he has served seven athletic directors and six chancellors, worked for 10 head football coaches and nine head men’s basketball coaches. He has on the sidelines for 523 football games, which represents nearly 47% of all University gridiron contests since the institution began fielding a team in 1904; and distributed uniforms to more than 1,600 Mocs football lettermen.

Royster provided input during the building of McKenzie Arena, which opened on Oct. 8, 1982. He worked 23 football seasons at Chamberlain Field, followed by the last 24 at Finley Stadium.

“Mike has always been an important figure in keeping things organized around here,” said Chancellor Emeritus Fred Obear, who served at UTC from 1981-1997 and 2004-2005. “If anybody could figure out how to do it all, Mike would be able to do that.

“My memories of him come mostly from basketball and the Southern Conference tournament, wherever it was taking place. I always picked at least one away game when I was the chancellor, and I didn’t have to worry about a thing because of Mike’s work and his commitment to making things happen on time in the right way. He made it happen for a lot of people over the last 48 years.”

Royster came to Chattanooga from St. Andrew’s School in Sewanee, Tennessee, where he coached football, baseball and basketball and was the trainer and equipment manager. He learned about a potential opening at UTC from sporting goods salesman Jim Jarvis, who connected Royster to head football coach Joe Morrison, a legendary National Football League running back and wide receiver who went directly from the New York Giants football team to the Mocs coaching job after his NFL playing career ended.

The UTC football coach, Royster said, was in dire need of an equipment manager.

“I don’t know what Jim Jarvis had told him. We never really discussed it,” Royster said, “but Coach Morrison wanted me to come work with him.

“I remember walking into the old equipment room, and the place was a mess. The room wasn’t a whole lot bigger than my office is now, and there was stuff everywhere. It was a mess, and I’m thinking, ‘How am I ever going to organize this?’”

After accepting the job offer, Royster came to UTC for what he thought would be a short-term stint.

Initially, he was on the UTC campus all the time between work, school—he received a bachelor’s degree in elementary education from the University in 1977—and housing.

“For a couple of years, my wife, Pat, and I ran the Stadium dorm,” he said, the four-story building housed within the confines of Chamberlain Field’s north stands.

“Then we moved to the new dorm down the street that they had just finished. The kids called it The Village.”

Those units are now known as Boling Apartments.

After Royster received his degree, Athletic Director Harold Wilkes elevated him to full-time equipment manager for all Mocs sports, overseeing the equipment purchases and inventory of every UTC intercollegiate athletic program and the repair and maintenance of athletic equipment.

“Looking back, it’s unbelievable, but Maclellan was all we had,” Royster recalled. “I don’t know how we did it, but we housed everything in one place.

“I finally talked Coach Morrison into giving me a few extra feet, and I added on a room that was just wide enough to have a (clothes) hanging rack going from the front to the back and the top and bottom, and just had stuff hanging in it everywhere. We were organized, but we were packed like sardines.”

After the completion of McKenzie Arena and Finley Stadium, with ample locker room and storage space in both facilities, Royster’s responsibilities continued to expand to other areas within the department. He was named assistant athletics director in January 2000, directing the many facets of gameday management for UTC sports—including game administration, game officials, promotional event coordination, and facilities scheduling and use.

While most of Royster’s work is behind the scenes, he has been very visible as a leader within his industry. He has served on the NCAA football rules committee and numerous equipment safety-related athletic councils. Since 2010, he has been the executive director of the Athletic Equipment Managers Association (AEMA), a national organization whose purpose is to promote, advance and improve the equipment managers profession.

“In my professional association, I’ve done about everything you can do,” he said, “and I don’t think you would be doing your job if you didn’t think about player safety.

“The AEMA has worked hard with NOCSAE (National Operating Committee on Standards for Athletic Equipment) to ensure that there’s a seal on every football helmet that says the helmet has been tested and meets all specifications. There’s a NOCSAE seal on every baseball and softball helmet, on chest protectors, catchers’ helmets, hockey helmets, some hockey gear. A helmet isn’t legitimate unless it has that NOCSAE seal.”

Royster said his upcoming plans include spending more time with his children, Robin and Joey—who both graduated from UTC, as did their spouses—and his five grandchildren. But Mocs student-athletes will still be in his thoughts.

“I’m going to miss being around the kids every day, and I will miss that part a lot,” he said, “but you had to know that sooner or later that day was going to happen.”

8 Comments » for After more than 47 seasons, Mike Royster lays down his Mocs helmet