Any drug from anybody accepted in disposal box at police station 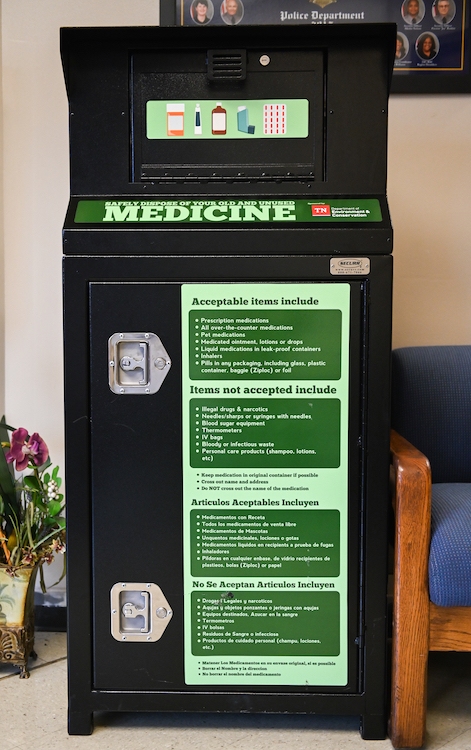 Why should you participate?

That’s how many prescription drugs have been dropped in a disposal box since it was set up in the University of Tennessee at Chattanooga police station about a year ago, said Lt. John Boe, operations manager for UTC Police and coordinator of the drug take back.

The figure is evidence to the success of the 24/7 program, he said, which is designed to give people a chance to anonymously throw unused or out-of-date prescriptions for both humans and pets.

The only thing not accepted are syringes, IV bags and radioactive medications. Syringes, though, can be dropped off at the police department’s administrative offices.

The box is located just inside the Police Department’s entrance on the right side of the Administrative Services building at the corner of Palmetto and East Fourth streets.

“You can literally walk in our door, discard your drugs and walk back out,” Boe said.

About once a month or so, members of the Tennessee Dangerous Drugs Task Force come in, pick up the drugs and carry them to Nashville to be incinerated, Boe said.

Anyone can drop off their drugs, even if they’re not a student, faculty or staff at UTC, he added.

The permanent drug disposal box is an extension of the Drug Take Back Day that’s held every semester in Heritage Plaza. The event has been taking place since 2013, said Tricia Henderson, assistant director for the education programs for Alcohol and Other Drugs and mental health in the Office of the Dean of Students.

Organizer of the Drug Take Back Day, she said about 500 pound of prescription and over-the-counter medications have been collected in that time, she said.

Although the permanent box at the police station is a success, not enough people know it’s there, she said.

UTC is the second university in the state to have a permanent disposal box, which was funded by a state grant, Henderson said.

While any type of drug is welcome, one of the main focuses of the box is to offer a chance to drop off narcotics and other addictive drugs, Boe said.

“Prescription narcotics are pretty rampant for abuse and can led to opioid addiction so we want to eliminate that by taking as many as we can off the streets,” he said.

In some cases, it may be that the physical pain a person was experiencing is gone, so they have some left and want to keep it away from their kids, he explained. Or maybe they’re addicted to the prescription medication and are trying to get off it and make a new start, he added.

“Sometimes when people have had enough of living one way or abusing themselves in a specific way, they want to make a change in their lives for the better,” Boe said. “You start out taking small steps ,and this is just one small step in that process.”

But if someone has unused or out-of-date blood pressure medication or heart medicine or a prescription for psoriasis—whatever the case may be—those, too, are welcome.

“To get blood pressure medicine, you may go to the doctor and he may try two or three medicines until he gets you right,” Boe noted. “So you’ve got two or three bottles of blood pressure medicine sitting around the house, what’re you going to do? You want to keep it out of the reach of the kids. So parents are trying to be a little more cautious and safeguarding their kids from access to those kinds of drugs. This is an excellent opportunity for them to do that.”

About once a month or so, members of the Tennessee Dangerous Drugs Task Force come in, pick up the drugs taken from the box and carry them to Nashville to be incinerated, Boe said.

While the box is under surveillance 24/7, no one is going to come after anyone regardless of the type of drug they drop into the box, he said.

“I look at it as an amnesty period, like the city when they had a gun take back,” he said. “Officers don’t harass the people turning in weapons. They just thank the person and allow them to leave.”